Canadian artist Stikki Peaches is best known for his satirical graffiti and multilayered wheat-paste prints bursting with nostalgic pop culture references, punk symbols, and tattoo designs. Much like Banksy, Stikki operates in complete anonymity and has been photographed only while masked. Stikki’s works can be identified by their pastiche style of composition and the tagline “What if Art Ruled the World?” which imagines a conflict-free society governed by artistic expression and appreciation. While he intentionally distanced himself from the contemporary art scene, Stikki Peaches today finds himself one of its enigmatic stars, occupying the liminal space between the street and the gallery. Stikki’s eye-popping commercial art has been exhibited in shows in New York and at Art Basel Miami, and his works have been purchased by celebrities including Lady Gaga. His murals can be found on the streets of Paris, New York, Toronto, Los Angeles, Barcelona, Berlin, Stockholm, London, and his hometown of Montreal. 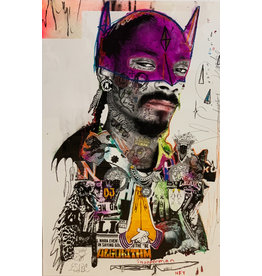